Bermuda Post has issued  one  WWF stamp set consists of  four stamps  feature the Line Seahorse  ( Hippocampus erectus) on June 17, 2004. Along with the stamp issuance,  the First Day Cover also issued  with  the head image of the species on the left-side  and standard post mark. 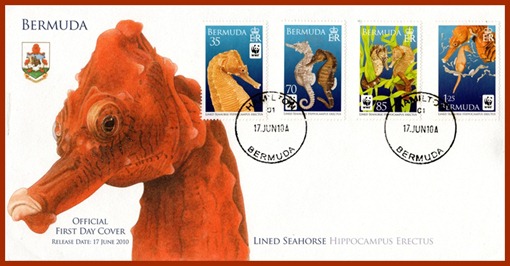 The Hippocampus erectus species can be found with a myriad of colors, from greys and blacks to reds, greens, and oranges. The lined seahorse lives in the Atlantic Ocean as far north as Canada and as far south as the Caribbean, Mexico, and Venezuela. It swims in an erect position and uses its dorsal and pectoral fins for guidance while swimming.

The Pheasant Birds of Bhutan 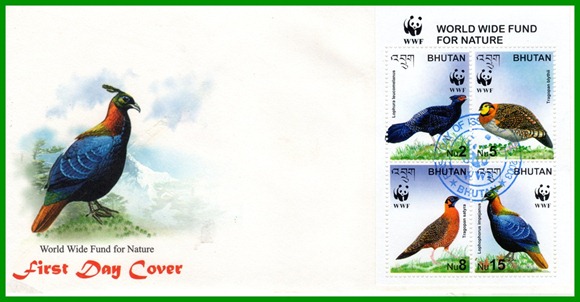 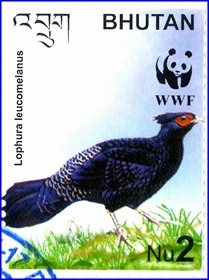 Lophura leucomelanos or the Kalij Pheasant, , is a pheasant found in forests and thickets, especially in the Himalayan foothills, from northern India to western Thailand.

Males are rather variable depending on the subspecies involved, but all have an at least partially glossy bluish-black plumage, while females are overall brownish. Both sexes have a bare red face and greyish legs (the latter separating it from the red-legged Silver Pheasant). 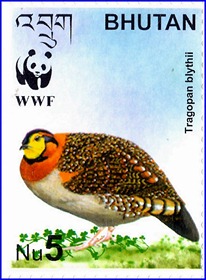 Tragopan blythii or Blyth’s Tragopan  or the Grey-bellied Tragopan is  a vulnerable species of pheasants and located in many different areas, including Bhutan through north-east India, north Myanmar to south-east Tibet, and also China.

The total population is estimated to be about 2,500 to 9,999 birds.This estimate is a very small number compared to some of its relative birds and is believed to be decreasing at a rapid rate.

Tragopan blythii normally flocks to wooded areas as it prefers the undergrowth of evergreen oak and rhododendron forests, and other dark, quiet places. This bird has a higher elevation than most birds. Blyth’s Tragopan pheasant is the largest of the genus Tragopan.

Blyth’s Tragopan are generalists. In the wild, they consume seeds, berries, fruits, and buds. Captive birds usually consume insects, worms, and even small frogs. While they are primarily vegetarians, most birds have a predilection for berries and fruit.
Read more »
Posted by Birdlife International Stamps at 5:58 AM No comments: Links to this post 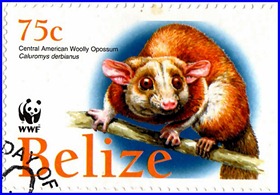 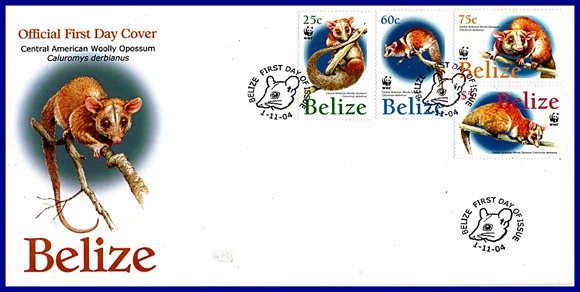 The Postal Administration of Belize has issued the stamp set of WWF series features the protected species  the Central American woolly opossum or Caluromys derbianus on November 01, 2004. The  another issued is one the First Day Cover that was considered  the local WWF cover. The cover have a special image of the Central American woolly opossum on the left-side of cover and  a specific post mark depicted a head of this species.

Read more »
Posted by Birdlife International Stamps at 5:26 AM No comments: Links to this post

The Fiji crested iguana (Brachylophus vitiensis) is a critically endangered species of iguana native to some of the northwestern islands of the Fijiian archipelago, where it is found in dry forest. 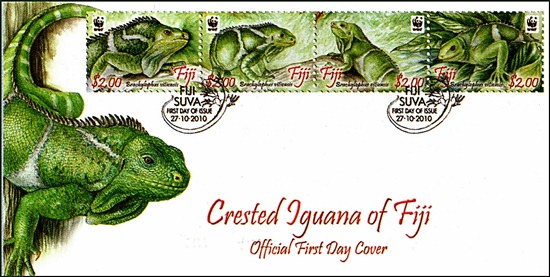 Fiji Post issued the local WWF of this series alongside  with the issuance of stamp set on October 27, 2010.  More explanation about the stamp set can read in  blog “Nature  Flona  Stamp “.

The Fiji crested iguana is a large stocky lizard distinguished from the Fiji banded iguana by the presence of three narrow, cream to white colored bands on males, rather than the broader bluish bands of the latter species.

The biggest threat this iguana faces is habitat loss due to fires, storms, agricultural development, and competition from feral goats.

Posted by Birdlife International Stamps at 6:34 AM No comments: Links to this post


The Postal Administration of Azerbaijan has issued the stamp set of WWF series features Persian leopard or Panthera pardus ciscaucasica  on January 07, 2005.

The First Day Cover ( the local WWF cover) issued also along with the stamp issuance has special image of the species on the left side of cover and  also has a special post mark depicted Persian leopard.

The Persian leopard also called Caucasian leopard or Panthera pardus ciscaucasica is the largest leopard subspecies, weighing up to 90 kg , and light in color and is native to eastern Turkey, the Caucasus mountains, northern Iran, southern Turkmenistan, and parts of western Afghanistan. 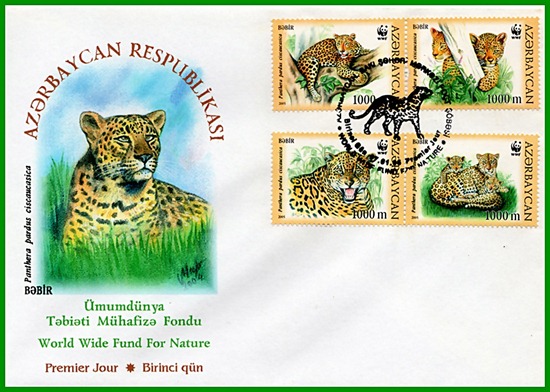 It is endangered throughout its range with fewer than 871–1,290 mature individuals and a declining population trend.  Persian leopards are threatened by poaching, depletion of their prey base due to poaching, human disturbance such as presence of military and training of troops in border areas, habitat loss due to deforestation, fire, agricultural expansion, overgrazing, and infrastructure development.

Posted by Birdlife International Stamps at 10:11 PM No comments: Links to this post

The Jaguar or Panthera onza is a big cat, a feline in the Panthera genus, and is the only Panthera species found in the Americas. The jaguar is the third-largest feline after the tiger and the lion, and the largest in the Western Hemisphere.
The Postal Administration of Belize has issued two of the First Day Cover along with the issuance of WWF stamp set features Jaguar or Panthera onza on December 09, 1983. One of the  WWF cover sealed with four stamp and the other one of the WWF cover sealed with a souvenir sheet. The both of local WWF cover have  a specific post mark depicted Jaguar. 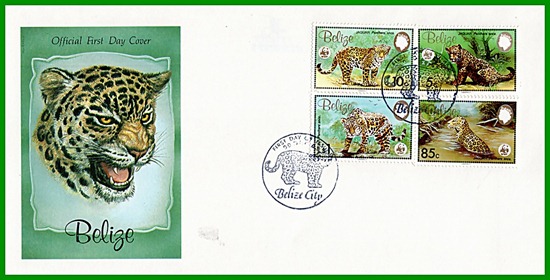 This spotted cat most closely resembles the leopard physically, although it is usually larger and of sturdier build and its behavioral and habitat characteristics are closer to those of the tiger. While dense rainforest is its preferred habitat, the jaguar will range across a variety of forested and open terrains. It is strongly associated with the presence of water and is notable, along with the tiger, as a feline that enjoys swimming.
Read more »
Posted by Birdlife International Stamps at 9:12 PM No comments: Links to this post

The Postal Administration of Azerbaijan has issued  the stamp set of  WWF series which  consist of four single stamps  feature  the Ferruginous Duck or Aythya nyroca on May 05, 2000.

Along with this issuance  the local WWF cover as the First Day Cover also issued. The cover has image of this species on the left-side and special post mark depicted  Aythya nyroca. 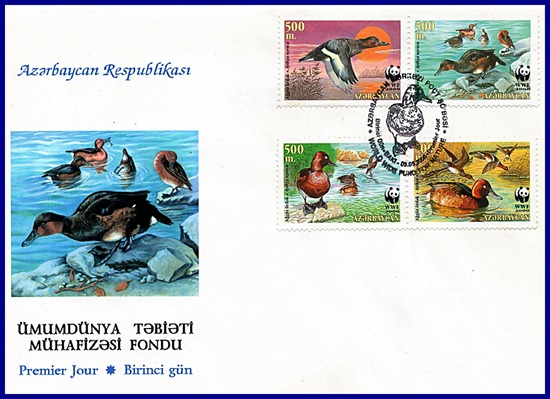 The Ferruginous Duck , also Ferruginous Pochard (Aythya nyroca) is a medium-sized diving duck from Eurasia. The species is known colloquially by birders as "Fudge Duck". It is one of the species to which the Agreement on the Conservation of African-Eurasian Migratory Waterbirds (AEWA) applies.

Their breeding habitat is marshes and lakes with a meter or more water depth. These ducks breed in southern and eastern Europe and southern and western Asia. They are somewhat migratory, and winter farther south and into north Africa.

Read more »
Posted by Birdlife International Stamps at 11:03 PM No comments: Links to this post 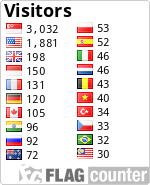